End of an Era

For a span of close to seventy years, members of my extended family have held an annual gathering on their farm. When my mother was a young girl in the 1940s, she would go to her aunt and uncle’s farm in Elk River, MN. In those days, the gatherings were called powwows. My mother was not a farm girl, but she still talks fondly of those visits to Uncle Mike and Aunt Irene’s farm.

After my mother started her own family, she would take my sisters and me to the farm each summer for the powwow. This was in the late 1960s, and maybe early 1970s. The farm was packed with family and friends of Mike and Irene, many of whom I did not know. Just as my mother had played with her many cousins who all convened at the farm, my cousins and I would explore the farm. We were suburban and city kids, so the farm was kind of exotic for us… another world. We’d explore the barns, gawk at the cows, watch Great Uncle Mike do chores, get a ride on the tractor-pulled hay wagon, and spend the better part of the day sliding on flattened cardboard boxes down the steep grassy hills on the back of the property.

As I finished my high school years, I stopped going to the annual gathering, but made my way back sometime toward the end of my college years. The event had changed a little bit. By the 1980s, it was held later in the summer, maybe even early fall. Great Uncle Mike had retired from dairy farming, so the cows weren’t there, but there were lots of antique tractors, as Mike Jr. (my mom’s cousin) was an avid collector. The events were sometimes called “corn feeds”, and in some years they were “threshing bees”. One thing was the same: family and friends from all over showed up for the gathering, which now covered an entire weekend. My mother still had the pleasure of visiting with her cousins, just as she had done forty years earlier.

I skipped attending for a number of years again in the late 1980s through the mid 1990s, yet when I did attend, I found that music had become part of the experience. Great Uncle Mike was of Hungarian descent, and some of his cousins from the “old country” would make the travel to Elk River. I remember hearing old world accordion music, and eating corn on the cob, and enjoying Great Uncle Mike’s boisterous laugh and Great Aunt Irene’s perpetual smile (two constants over the decades). Mike Jr. and wife Sandy were the hosts of the event by now, but they were clearly carrying on the tradition established by Mike and Irene.

Before too many more years rolled by, we were missing Mike and Irene, who both passed away in the early 2000s. They were conspicuously absent, because by 2005, their presence had been a hallmark at these gatherings for nearly sixty years. Also in these years, the family farm in Elk River was sold off, and the gatherings moved to Mike and Sandy’s new homestead near Milaca, MN.

Mike and Sandy’s influence on the event was clear by this time, as the gatherings were characterized by lots of bluegrass music. Mike and Sandy had become friends with a large community of bluegrass and country music players. This was about the time I had taken up the banjo, so these events drew me back more frequently than in years past. We’d stay up until all hours jamming. In the cool September evenings, the dew would form and put a particular chill in the air, which also made it difficult to keep banjos, guitars, mandolins, and fiddles in tune. These were good times, though, and I came to meet a lot of good people who were a generation older than me.

Which brings us to 2018. Mike and Sandy announced that this would be the last year they would host the event. It had grown to a nearly week-long affair; all of those friends of theirs would descend upon their property with their motor homes. It’s a lot of work putting on an event like this! And, the sad reality was, each year more friends and family were passing away since the previous gathering. For all the changes over the years, a few things stayed constant up to the end. You could still roast thick-sliced bacon with onions and peppers over an open fire (affectionately called “heart attack on a stick”). You could count on hearing lots of music, and eating loads of corn. Finally, and most importantly, you could count on spending quality time with family and friends, telling stories and sharing memories. 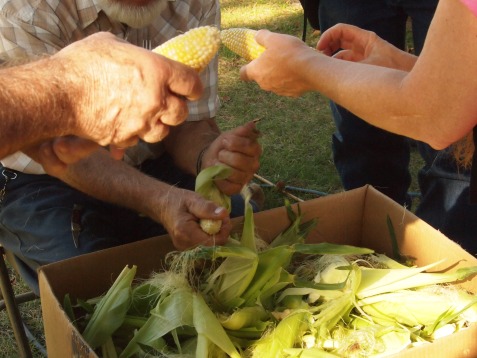 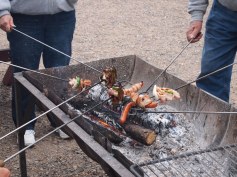 Making “Heart Attack on a Stick”

Shootin’ the bull, having some good laughs

Estimating that my first attendance at a powwow was somewhere around 1968, this meant I had been attending off and on for about 50 years… shocking for someone like me who often mistakenly thinks he’s younger than that. Without this gathering in the future, it’s unlikely that I will see some of those friends and musicmakers of that older generation ever again. For their part, the coming years will likely be characterized by continuing to say goodbye to dear friends as more of them pass away. It’s a sobering thought, one that I hope is tempered by all the many years of memories and laughter that they shared.

Even sadder than seeing this tradition come to its natural end is the realization that my generation hasn’t provided a similar experience for our kids or grandkids. My sons won’t really have a decades-long tradition to look back upon when they are my age. Still, it’s a little piece of Americana that I’m pleased is part of my life experience.

Thanks for all the memories, Uncle Mike and Aunt Irene, and Mike and Sandy!